About the Bandhavgarh National Park

Bandhavgarh nationa park situated at 197 km away north-east of Jabalpur and has derived its very name from an ancient fort in the area. Bandhavgarh National Park belongs to the Vindhyan mountain ranges of central India. The thick forest of Bandhavgarh National Park sits in a bowl encircled by cliffs and wooded Vindhyan mountains, and its plains have a number of grass and reed covered wetlands where Kingfishers dive and Egrets sit poised, hunch-backed, in the shallows.Up above, vultures nestle in holes in the sheer cliffs.

Bandhavgarh was declared a national park in 1968. Since then many steps have been taken to retain the wildlife present in the park. Bandhavgarh National Park as an unspoilt national habitat for a variety of wildlife peculiar to the area. This includes gaur (Indian bison), sloth bear, leopard, porcupine, wild boar, sambhar and spotted deer, among others and of course, the tiger.

Bandhavgarh national park has been divided into three zones – tala, magdi and bamera. Tala zone being the most popular amongst the tourists due to its highest tiger sighting. Now the park authorities are looking forward to develop magdi zone by providing more opportunities to spot tiger. Elephant shows are held in magdi zone of the Bandhavgarh national park to amximise the chances of spotting the elusive king of the junlge. 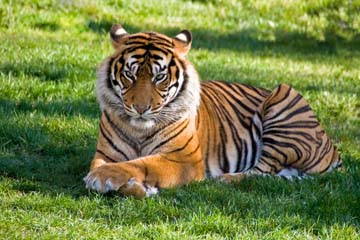 Bandhabgarh National Park has captured the imagination of many with its diverse wildlife and breathtaking landscapes. THE INDIAN VOYAGE- will guide you find the right tour package that matches your needs, desires, and budget.

Morning and evening jeep safaris in Bandhavgarh National Park are escorted by our specialized naturalists for extensive wild life viewing. Your day begins just before dawn with wake up call along with a cup of tea/coffee at the designated time (i.e. if you are not already up by some call from the inhabitants of the jungle). An open Gypsy awaits you to take you even more closer to the nature and to see the majestic tigers. We provide some fruits neatly packed and a bottle of mineral water for you 4 hour safari in the jungle

The experience of sitting high a top an elephant in a teak wood chair, through the cool jungle of Bandhavgarh, is an experience you’ll never forget. The tour includes air-conditioned hotel transfer, Park admission, safari ride, buffet lunch all in one complete package. Don’t miss this great value tour.

The Bandhavgarh Fort is situated in Bandhavgarhin Umaria district of Madhya Pradesh, India. It is located on the Bandhavgarh hill, rising 811 meters above sea level at the centre of the Bandhavgarh National Park. It is a surrounded by a large number of smaller hills separated by gently sloping valleys. These valleys end in small, swampy meadows, locally known as ‘bohera’.
No records are available to show when Bandhavgarh fort was constructed. It is thought, however, to be some 2000 years old, and there are references to it in the ancient books, the “Narad-Panch Ratra” and the “Shiva Purana”. The Bandhavgarh fort derives its name from the most prominent hillock of the area, which is said to be given by Lord Rama to his brother Laxman to keep a watch on Lanka. Hence the name Bandhavgarh (bandhav = brother, garh = fort).

To view a day in the life of an Indian village where the pace of life is still measured by the rhythm of the seasons. The humble dwellings, the mud clustered houses, the elders smoking hookahs sitting on a cot, are some of the common scenes which signify that the time stands still in certain areas of the world even today.