Manimahesh peak is located at an altitude of 5656 meters above sea level and falls under the Bharmour valley of the Chamba district. At its base is the famous Manimahesh Lake. Considered as a holy spot, a yatra or pilgrimage called the Manimahesh Yatra is conducted here every year immediately after the festival of Janamashtami. This lake is supposed to be blessed by goddess Kali and protected by Lord Shiva. Thousands of pilgrims journey here to bathe in its sacred water, on the fifteenth day, following the festival of Janamashtami. A fair is held every year at this lake during the month of August or September. However, in 1968, an Indo-Japanese team of mountaineers headed by Nandini Patel attempted to scale the peak. Now it is believed that this mountain possesses divine powers and would remain unconquered. The mountaineers, however, attribute their inability to scale this peak to the harsh mountain terrain.

Day 02 : New Delhi – Dharamsala
In time transfer to Railway station to board train to Dharamshala.
Overnight at Hotel in Dharamshala.

Day 03 : Dharamshala – Hardsar – Dancho
Trek to Hardsar from Dharamshala gradually ascend to Dancho, which takes around 3 hrs.
Overnight in Camp.

Day 06 : Dancho – Dharamsala
We come back to Dharamsala where we started the trek from.
Overnight at hotel in Dharamshala.

Day 07 : Dharamsala
Half day city tour of Dharamshala, In time transfer to Pathankot Railway station to board train to New Delhi. 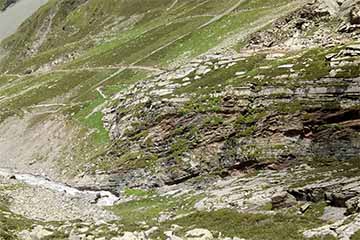