About the Kanha National Park

According to Rudyard Kipling, Kanha National Park, located in the Mandla district of Madhya Pradesh, is the most spectacular protected wildlife reserves of the world. It covers an area of 1,940 sq.kms and is one of the largest and best monitored parks in the subcontinent and definitely one of best place in the world to see the critically endangered Tiger.

The great sal forest of Kanha National Park,stretching across Maikal hills of Satpura range,has inspired Rudyard Kipling to write the English classic- The Jungle Book. If there is one animal species to represent the Kanha,it would probably be the barasingha or the swamp deer. The swamp deer was faced with extinction but some keen measures which included fencing off some animals helped to save them.

The main wildlife attractions in the park are tiger,bison,gaur,sambhar,chital,barasingha,barking deer, jackal fox,porcupine,hyena,jungle cat,python,pea fowl,monkey,mongoose,tiger and leopard. There are near about 350 species of birds in Kanha and if you are a bird watcher then this is certainly going to amuse you.

The best time for the Wildlife safari at The Kanha National Park,is from October to June. Timing for the entry into and exit from,the park vary according to the season.

You could go into the Kanha National Park taking up a jeep safari or elephant safari. Both elephant and jeep safari are permitted only during the day. The best time to sight is from dawn to 10 am or from 4 pm to night, after which the park is closed for visitors. Over the time,the animals have accustomed to jeeps and elephants,due to which the sighting of animals are fairly common.

Elephant safari involves tiger tracking and photography from elephant back,which often involves systematic tiger tracking,also the altitude increases visibility. Mahouts,the driver and keeper of the elephant,are expert trackers and would be able to identify all possible signs of tiger’s hideout.

The jeep safari can also be taken by hiring a jeep from the park office. A Forest Department guide must always accompany you on these trips. 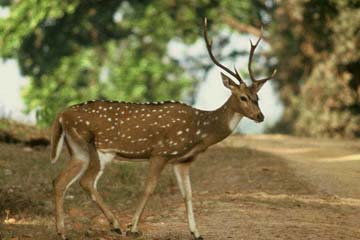 The meadows around Kanha are the best places to see blackbuck,chital and barasingha throughout the day. Their are many places which you certainly don’t want to miss,few of them are:

Bamni Dadar: Which is also known as the Sunset Point,and considered as the most beautiful areas of the Park from where a spectacular sunset can be watched. This is one of the Hardground where Barasingha is found. The luxuriance of Kanha can best be experience from Bamni Dadar. Sambar, barking deer,gaur and the four horned antilope are the animals which are commonly seen here.
Kanha Museum: The Kanha Museum is the Museum which is located within the Park. The Museum is the right place to understand the topography of forest and other interesting aspects of the Park.

The Floura and Faunas of Kanha Tiger Reserve: Kanha is one of the most promising tiger reserves which also hosts the endangered barasingha(early it was counted as 66 but now increased to 400 in number),the four horned antilope,gaur,jackals,sloth bears,wild boars,mongoose,flying and Indian palm squirrels,chetal and hyenas. Kanha is paradise for bird watchers as it hoards more than 300 species of rare birds inhabiting here.

Kanha is known for its soaring forest and well-known grasslands. An impressive hoard of creatures can always be seen on the grasslands,with the spotted deer overpowering rest of the lot. The Dadars and huge grasslands and scrubby plateaus on the Maikal Hills,ranging in the altitude from 450m to 900m are ideal place for Gaurs. The steep ridges adjoining the plateaus are some of the spectacular landscapes of the Kanha Tiger Reserve.

The sal tree and various species of Bamboos are the most prominent features of Kanha’s extensive flora. These have complex,distinctive flowering pattern,with Sal blooming annually over a period of several months and deciduous throughout the year. Many bamboo species flower only once during their extremely long life cycle, which may span around several decades.
It is estimated that Kanha is home for more than 600 species of flowering plants. Near about 50 water plants are included in the Kanha Management Plant. Water lilies,an aquatic plant has considerable importance to the Barasingha.

One of the greatest achievements of this park is its contribution in saving many endangered species of animals which were about to become extinct. A trailing wild tiger lazing around the shades of the forest of Kanha offers its own charm. The park is also home to Sambars,Gaurs which are generally seen in green meadows grazing the grass. Animals like chital and blackbuck are also very common here. The other main wildlife attractions of Kanha are Barasingha,Barking deer,Black deer, Chousingha, Nilgai, Mouse deer,Sloth bear,Jackol fox,Porcupine,Hyena,Jungle cat,Python,Mongoose,Leopard etc.

Kanha National Park is like a treat for people who love to watch birds. Multitudes of birds species can be seen here,especially during winters. The quantity and the variety of birds will differ with the time of the year. The checklists of the birds are available with most of the National park in India,but unfortunately there is no checklist available at Kanha National Park. But the Kanha Museum contains a large wall,where the most common seen 64 species of birds are displayed,but few of the birds which are displayed on the wall are rarely seen in the park such as The Nakta or Comb Duck,the Longbilled Venture,the Yellow Wattled Lapwing and the blue tailed Bee-eater.

Whereas the species which are commonly seen here are missing from the wall,whom the bird watcher can notice here,such as the Blackwinged Kite,the Crested Hawk Eagle and the Shikra,White-eyed buzzard.
Recent research indicates that there are more than 300 species of birds are there in Kanha National Park. Water birds can be found near several rivulets within the park and at the Sarvantal – a pool frequented by numerous water birds. The best time to indulge yourself in bird watching is early in the morning or late in the afternoon.

The Hallon and Banjar valleys were reserved as the hunting grounds for the Britishers. This area of Kanha was full of swamp deer or hardground barasingha,but over-hunting led to their numbers being depleted and the forest was closed for hunting in 1931.

In 1955,the Banjar valley,was upgraded to a National Park. This was done with special legislation and was the culmination of furore that followed the ruthless hunting of 30 tigers by the privileged hunters in the area in and around the Banjara valley and Hallon valley.
Saving the hardground Barasingha, whose numbers fell down significantly was another reason for making the National Park. The initial area of National Park was 253 sq.km but it was expanded to 318 sq.km in 1962,after that in 1970, the Mulki Valley was added which has taken the area to 446 sq.kms.
Initially when project Tiger was started in 1973,nine Tiger Reserves were selected and Kanha National Park was one of them.

Under project Tiger,the Hallon valley was integrated into the park as a sanctuary in 1974 and as a National Park in 1976. With the integration of Hallon valley,the area of the National park went up to its present area of 940 sq.kms

If you want to reach the Kanha National Park,then you have to surpass the two main entry points, they are Khatia and Mukki. Khatia is 3 kms away from Kisli. Jabalpur is 165 kms from Kisli and Mukki is 203 kms away via Motinala and Garhi from Jabalpur. For the visitors from Bilaspur,Raipur and Balaghat,Mukki is more convenient.

Kanha is 225 kms from Gondia which is one of the convenient railheads to Kanha National Park. If you reaching Kanha by Road then,there will not be any problem as the Kanha National Park is well connected to major cities such as Jabalpur-175 Kms, Khajuraho-445 Kms,Nagpur-280 Kms, Raipur-219 Kms. Also,there is a regular bus service between Jabalpur to Kanha to take you to your destination conveniently.